Bugs in The Winter? 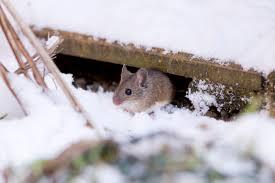 Bugs In the Winter

Wintertime is here so we should get ready for experiencing any insects or pests that’s around us. Various insects might have different routines during winter months. By being aware of the insect habits, you’ll be able to keep these pests out of your home. Some insects include exothermic, so they can’t make their own heat. With that said, the environment determines if the bug lives are dies.

Other’s insects cannot live during the freezing climates in the winter. Nevertheless, various insects can produce something such as an anti-freezing agent in their body. Their own hemolymph contains an amount of glycerol that will secure them from freezing during these winter months. According to the types, the pests may overwinter as grownups, larvae, pupae, or egg. The insect usually goes into migrate, diapause, or simply die. When warm temperatures return, they will begin to get active.

Various cockroach varieties won’t ever survive in a temperature that are low as 15’ Fahrenheit. During the winter months, many of them will move inside for locating some warm places, for example, basements or loft rooms. The reduced temperatures also slow their development rate down. Although cockroaches could be existing during the cold winter month, they shall be recreating at a very rate that is slow. Some kinds will overwinter within the diapause condition before they can continue getting around during the warm season.

Spiders are particularly typical that can be found in just about any residential property. Some spider species, such black widow spiders, are likely to overwinter inside structures and other shelters in the outside areas. They’re going to end up being considerably effective while in the cooler winter weather. Another reason for any reasonable spider activity during this winter months is many of the species will also be less effective with this month. Cold weather can be the time that is best for you really to wipe cobwebs and spiders from the cracks and crevices of your home.  Getting rid of these insects will reduce infestation during the upcoming spring months.

Ants peak time is the summer months and not so in the winter. They often create tunnels below ground, to enable them to keep hidden during the winter months. T. Certain ant types, such as the Argentine piss Ants can survive the winter that is freezing because they’re often nesting round the pine trees. The bark of the pine woods can digest the sunlight, so they are able give a warm temperature for the Argentine piss ants for locating food during the cold winter month.

Ticks In the USA, your will manage to find many different types of clicks that exist …surrounding you. Various ticks have various behavior throughout the cooler months. Some species of ticks, such as for instance Lone celebrity clicks and American dog clicks tend to be sedentary during the wintertime. Other species, such as for example Black-legged clicks may be active and still are thus in search of delicacies during the cold winter month. They can be effective assuming that the weather stays above freezing. Nonetheless, their own activity is going to be greatly reduced during the freezing temps. They’re going to minimize their activity levels, to enable them to conserve liquids to amass compounds, such as for instance glycerol. This substance is extremely helpful to shield themselves through the freezing temperature.

Different mosquitoes have various behavior during this freezing season. Female mosquitoes in certain genera, such as for instance Culiseta, Culex, and Anopheles, will overwinter within the diapause state. They’ll quit eating blood and enhance their fat supplies. A number of them may overwinter whilst having egg within their systems. Male mosquitoes are not capable of entering the diapause state. They usually perish due to temperatures that are low. Most mosquitoes will be effective once more when springtime shows up.

Monarch are seen migrating to warmer temperatures and climates. They will take flight to the warmer areas of the country.  They generally proceed to the areas with cozy conditions, eg, Mexico additionally the southern element of California. Some of them is likely to be within the reproductive diapause condition as a preparation for the southern migration.  While in the spring season migration, these butterflies leave Mexico in March or April to travel back once again to the north. They will prepare and lay their own eggs during this time.

The best way to shield your home form the over wintering pest is to contact Truly Green Pest Service.  We can take care of your pest naturally and organically.   You can reach us at info@trulygreenpestcontrol.com