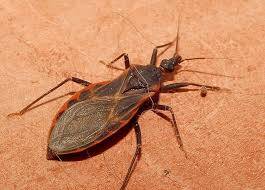 Why do we call this infamous bug the kissing bug? Do they kiss? The answer is no. They do not kiss. They were nicknamed the kissing bug because of where they bite. The kissing bug bites are around the mount and on different parts of the face. In fact, these bugs or night creatures and they attack the face because it is the first exposure when you’re sleeping.

The kissing bug is attracted to our carbon dioxide as you exhale. They are looking to pierce your skin for a blood meal.

Transmission of the disease is not that easy. You will need to rub the wound in return, the rubbing of the wound will smear the feces and will cause an infection.

Identification of the Kissing Bug:

The proboscis of the bug is straight. They have eyes that bulge out the side of its head. The legs are narrow and straight. Their color can be black to brown with stripes around the edges.

Complicating the issue, most people don’t report feeling a bite, Curtis-Robles says. Kissing bugs hang out indoors or out, preferring cracks and holes in older housing. Outdoors, they live beneath porches, in brush piles, or in rodent nests, outdoor dog houses, or chicken coops.

What to Do After a Bite

You may have an immediate symptom of a stink bug. Some of the reactions could be hives, swelling, redness, and itching. However, you may not even have a reaction to the bite. You may not exhibit any symptoms at all.

The seriousness of this bite can become very dangerous if left untreated. Chagas disease is a result of the Kissing Bug.  It can include heart disturbance rhythms that can cause sudden death, are enlarged heart that will not be able to pump blood throughout the body adequately, and even may cause the esophagus to enlarge. The parasites of this bug can even cause problems in the colon, affecting your eating and ability to crap.

If you feel that you have these symptoms and is infected, don’t hesitate to talk to your primary doctor. You will probably need blood test to discover if the parasite has entered your blood stream. You doctor may even refer you to a cardiologist to help with anti-parasitic drugs that will help prevent heart infection as well “according to Curtis Robles.”