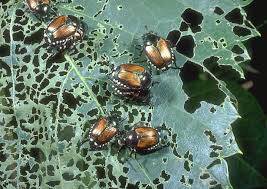 Japanese beetles are a species of winged insect that are native to Japan. In their native habitat, they are kept in check by a variety of predators and parasites. However, when they were accidentally introduced to the United States in the early 1900s, they quickly spread and became a serious agricultural pest. Japanese beetles are now found in every state east of the Mississippi River. They are particularly damaging to crops such as grapes, roses, and corn. Japanese beetles are also a major problem for homeowners, as they are attracted to the leaves of many common yard and garden plants. If left unchecked, a singleJapanese beetle can eat 40 to 60 leaves a day. While there are a variety of chemical products that can be used to control Japanese beetles, many people prefer to use more natural methods, such as traps and beneficial insects.

The best way to kill beetles is finding the larvae that you will find near the end of autumn and take several months to develop. Another way that is not the most glamorous and easy way is to walk around the garden and pick them by hand which is to time consuming It is also possible to kill beetles by walking around the garden and removing them by hand but this is too time consuming. Try mixing a little pesticide in the water and placing a little garlic in the water. Garlic will kill them too.

During the summer months beetles are a major problem. These Japanese Beetles lay they larvae towards the beginning of fall in which they will hatch during late summer are spring.  We have found that the best way to kill beetles is to keep the larvae from hatching when it is warm. If you can do this then you will prevent the beetles from becoming an enormous problem which can transpire in a couple of weeks. Even the best preventative measures will not work completely so killing the remaining amount is the next step.

Probably the sure way of getting rid of the beetles is to walk around your garden early in the morning and picking them off the bushes by hand and then dropping them into a bucket of soapy water.  Keep in mind that this is good for small amounts of beetles.

In any case there most likely will be to many beetles to kill.  If you have a large amount, you will be better off with environmentally friendly product and mix it with water. Spray each plant with the solution and missing no plant in the garden. You will see an immediate effect.

To handle a large garden work in sections, that way you will not miss any critical spots. Make sure you coat each plant and not miss any part of the plant. Missing plants will enable beetles to survive and create more beetles. Spray the solution carefully on the plants, being careful not to miss any areas. Missing any spots will see some beetles survive who will create. After spraying your garden make sure you spray the foundation of you home as beetles can rest in these areas.

Hanging traps near plants where beetles generally converge is yet another real way to kill the insects. Empty these traps on a regular basis. The primary option to kill beetles, however, continues to be to quit them at their source. Any beetle larvae that are spotted when you look at the garden should immediately be destroyed. This will stop the beetle population from growing quickly.