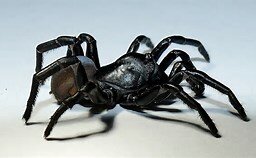 Spiders are one of the creepiest insects on earth.  They come in all shapes and sizes.  Some hairy and some with no hair.  Most are not harmless and on the other side the ones that are not harmless can inflict a potentially fatal bite.   Well, just as we have identified most of the species of spiders, there is a new one that looks like a tarantula, shiny, black and small.  It has a bite that will be painful much like a bee sting.  Pine Rockland trapdoor spider the spider was found by a zookeeper in Zoo Miami in Florida.

These spiders are in two different sizes. The male is smaller than the female.  The female can be quite larger than the male. This Spider smaller than the famous tarantulas and about the size of an American quarter.  The male size is similar to the half dollar coin.  So, imagine the female two or three times larger.  Ummidia species is a trapdoor spider.  These spiders are like other spiders. They wait on their prey to cross its path. They live in burrows beneath the soil.  The trapdoor venom can turn its prey insides to liquid. When the spider bites a human, it equivalents to a bee sting. The Trapdoor spider does not track prey. It waits for the prey to come by and pounce on the prey when it’s in front of them. Like most spiders use webs, these particular spiders use burrows for their home. These types of spiders do not move around to different locations. They can live in the same location, the same burrows for decades.  Female Pine Rockland trapdoor spiders have a very long-life span. 20 years for the female and 7 to 8 years for the male.