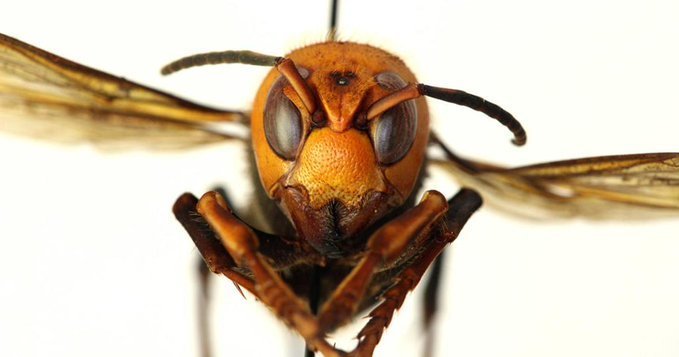 Previous item Flying Ants vs. Termites Next item Keep Ticks Out of Kansas...

29 days ago by Rob Allen in Bugs and Diseases 0

What is all this talk about the murder hornet. Does it actually murder?  This insect is of a hornet is roughly 2 inches long or bigger. Bad news…It’s here in the United States for the first time ever. This could cause trouble for humans and especially our bee population.

Japan is all too familiar with this hornet known as the Asian Giant Hornet, AKA…murder hornet.  It has reportedly killed over 50 people in Japan, according to the New York Times.

This Hornet is spooky. It has a big orange face that looks right at you. Very sophisticated looking.

The hornets are usually between 1.5 to 2 inches long, have large yellow-orange heads with prominent eyes, and a black and yellow striped abdomen.

The hornets were first spotted in Washington. So, they look like they are migrating into the states via freight or breeding.

Murder Hornets get their name from how they attack bee hives. They decapitate and kill the adults and eat the larvae and pupae of the bees.  One hornet can wipe out a bee have containing thousands of bees in a matter of hours.  You see, this makes this hornet dangerous to our protected bees. Bees pollinate our plants, and without that…say goodbye to your pretty gardens and flowers.

Our Hornets Dangerous to Humans?

According to the Washington State Department of Agriculture, these hornets do not typically attack humans. If they should attack, you will probably end up in critical condition. These hornets can kill you because they are capable of multiple stings. Their sting is so devastating that a bee suit will not be able to protect you. There need to be a specially made suits to battle these hornets. The stinger is too long.  You don’t have to be allergic to these hornets because they sting over and over which will take you down.

The murder hornet is not yet in Kansas City. Scientist are learning more about the hornet in Washington. What we do know is there is a massive hunt to find these hornets before they destroy bee in it’s path.

Keep up with Truly Green Pest Control for more coverage on the Murder Hornet.