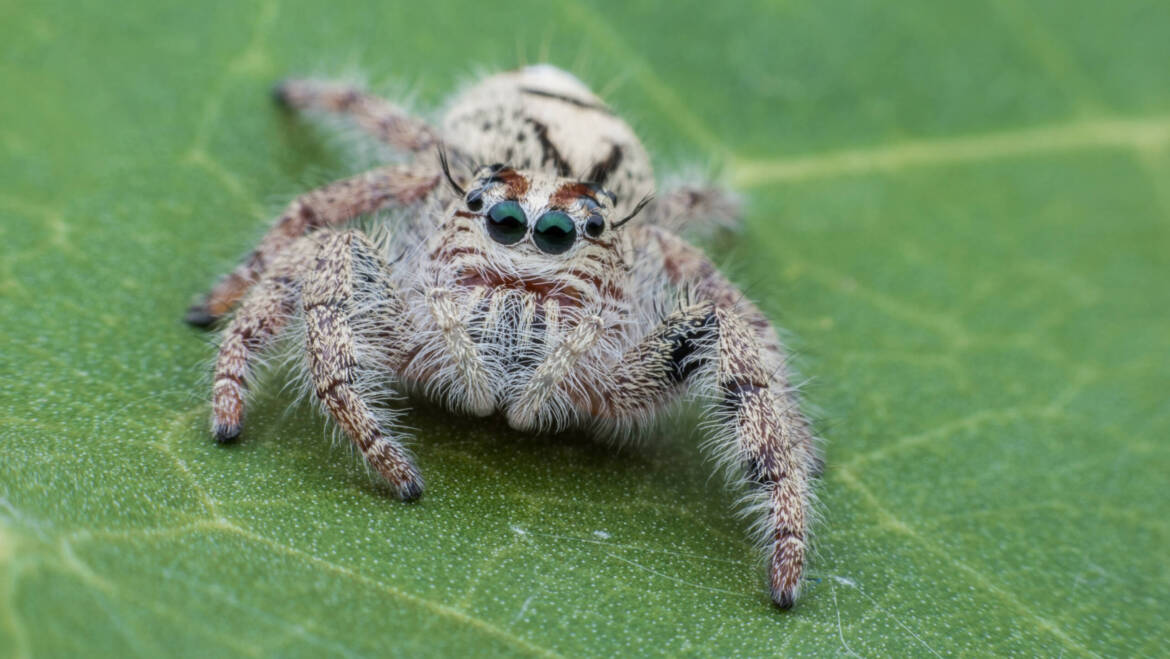 Common Spider In Kansas And Missouri 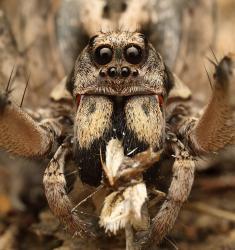 Wolf spiders can chase down their prey with excellent speed and vision. Also, when they don’t run after their prey, they can idle for a moment and attack a prey as it goes buy. They are not web spinners like most spiders. They have speed and hunting skills, like climbing and jumping pretty high.  Just like a cat, when you shine a light in the wolf spider eyes, they will reflect back at you. They possess excellent vision.

Body Structure: Features eight legs that are equally as long as its body and eight eyes situated in two rows on its head.

Characteristics:  Dark locations that are secluded is the prefered location for laying  over 100 eggs. She then will spin a soft silk, globe-like sac all around the eggs, that she next connects to spinnerets on the lower abdominal areas, carrying the sac with her as she moves. Depending upon environmental temperatures, eggs may hatch out inside of 2 weeks or gestation may take several months. Whenever eggs are ready to hatch, the female will likely split open the sac, freeing the young. When they’re discharged from the sac, the young climb onto the mother’s abdominal areas, where she will continue to care for them for approximately a month. A short while later, the young leave the caretaker by “ballooning,” which involves launching a stream of silk using their spinnerets into the air and then letting the breeze to haul them to a new location, or possibly by simply falling to the ground. The wolf spider, the biggest of the species, is known for its speed, heightened sense of touch, and keen sense of sight.

Unlike other spiders, wolf spiders do not nest in webs; rather, they reside in deep burrows under the ground. Wolf spiders are hunters, going after prey at night as opposed to capturing food in a web. The wolf spider can be found burrowing in a number of habitats, from forest floors to around garden shrubs. Wolf spiders tend to be skittish and will scurry away in lieu of biting an aggressor. Likewise, they may rear up on their hind legs, showing their fangs as a defense technique. Rarely do wolf spiders bite unless thoroughly provoked.

Sealing cracks around your home, as well as caulking gaps around doors, windows, and eaves, may prevent wolf spiders from making their way indoors. More of a nuisance than a dangerous pest, the wolf spider is a natural predator to other more menacing pests such as mosquitoes. However, if you are experiencing a large number of spiders around your home and are having a difficult time positively identifying the species, contact a pest control professional before attempting a do-it-yourself pest control treatment. Find out more about spider control for your home.

Orb weaver spiders have 8 eyes and enormous midsections that are typically globe-formed. These arachnids fabricate more mind-boggling networks of webs than other spiders, however they have a bit of leeway – while most spiders have 2 clawers for every foot, orb weavers have 3. They utilize their additional claw to help control the silk strings, as they make their spider webs. Their spider webs, which are utilized to get food and send mating signals, can range up to 2 feet in size. In the same way as other different bugs, orb weavers eat their spider web before modifying them.

Regarded by numerous individuals to be the cutest creepy crawlies because of their enormous eyes, jumping arachnids are about the size of a dime and are dark, dark, or in some cases splendidly shaded. Two little eyes section two enormous eyes that rest in the focal point of their rectangular heads. Those two fundamental eyes have a capacity like telescopes. Their eyes are fundamentally simply fixed focal points, and a long cylinder stretches out down from those eyes. This cylinder is loaded up with a fluid or some likeness thereof that we don’t thoroughly understand, yet it makes light bend, basically working as a second lens.

On the off chance that you see a fiddle, banjo, or jug in strong brown colored, you’re likely in the presence of a brown recluse which caution should be exercised. Brown recluse spiders will not come after you, however, if you stumble upon it, you most likely get bit. Another way is accidentally laying on a garment that the recluse is lodged on. If your home has a history of Brown recluse, make sure you shake out your shoes, or clothes to rid the spider.

Spider Webs left by cellar arachnids add to their status as irritation pest. Where numerous species spiders devour old spider web before turning another one, cellar spiders keep on adding to existing networks. Spotting erratic webbing, particularly in corners, demonstrates the nearness of cellar spiders. Most cellar spiders will be in dark, quiet, locations.

To keep spiders out of your Kansas City home, you must do two things. First, seal your home so they have a harder time getting inside. Second, reduce attractants, not just for spiders but also for the other insects they invade to hunt. To do this, here are some prevention tips our experts recommend.

Finally, if you have tried all the solution tips and you don’t want to deal with dangerous spiders, Call Truly Green Pest Control.

Schedule an Appointment… for your Kansas City Home Today.